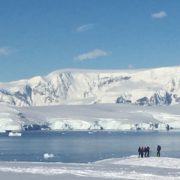 Finally this beautiful time of the year have arrived, it is when I take ski boots off for few months and start thinking in getting fingers strong and maybe some days of good surfing in Chile…. Let’s see how much free time is left …  For now legs still tight, and just happy to place my flip flops without guilt! Time for Catching up with some paperwork, insurance, permits, family, taxes and all those things that are part of life too… and slowly start planning the ski touring season in Europe, few trips coming: Norway Sailing & Skiing and some Chamonix Adventures.

Resuming the year: Have been a very hard year for ski guiding in the Bariloche area, since was a very bad snow year in general, so lots of hiking to get to snow. For some clients this is not an easy thing to do. Most expect to start from snow like you do in Europe or Northamerica. Here many times the access to snow involves or lift access or a good hour of hiking.  So first part of the season was with lots of hiking and  that kind of adventure.

For first part of the season, late July and August,  we did few trips to Frey hut and other multiday backcountry ski trips including good day trips out of Bariloche using slack country of Cerro Catedral Alta Patagonia to get to goods.

Then by, September, things got better and we had big storms in the Chilean side, accumulating around one meter and a half in only 72 hours storm. So the winter really started there and was time for Volcanoes. This year we did 2 volcanoes trip, and in one of the trips we did 3 volcanoes in 3 days accumulating more than 5000 vertical meters in that period. Strong clients, well friends more than clients. Volcanoes trips details are here: http://www.andescross.com/trips/ski-touring-across-the-volcanoes-of-the-andes/… check the video attached  with all the fumarole and Lava.. pretty crazy..

Right after this, came the biggest expedition of the season , to Cerro San Lorenzo, this peak is a remote peak in the Central Patagonian Andes, being the second highest peak of the Patagonian Andes after Cerro San Valentin in the Northern Patagonian Ice cap. We did not summit, since we were a group of  many people and was better to do a plan B skiing it satellites peaks. Most of the team was aim to ski near the satellite peaks of the mountain, and not to summit Cerro San Lorenzo itself.  Most of our gear was brought by horses to basecamp, and then from there we moved to higher camps.Cerro San Lorenzo is a big , big mountain that demands good weather and a long day of 2000 meters and 18 km round trip to High camp to High Camp. We did a lot of ski touring near Torres Feruglio and Cordon Cochrane area, doing day ski trips from our tents. Lots of winter camping and lots of cooking. The fun of this trip is to be in a remote location, self sufficient, using the cabins and tents for the ten days we were there. Feels nice to be out of contact for almost two weeks.  We celebrated the week with a good roasted Patagonian Lamb

We drove home, and after that came Antarctica ski touring trip for another 2 weeks. Since 2009 to present I have gone 7 times to the White Continent , each time for 2 weeks a year, skiing from a boat to the continent and antarctic islands, doing day trips in zodiacs and skiing some nice terrain.

Well that’s all folks !! Leave you here some pictures of all mentioned above.

As always , thanks to all long time friends clients as Tom, Marcos, Fran, Rob  and all and my partners guides Craig R and Stefan P. Also Doug S. for all this years of Antarctic work